Overspending and the True Meaning of Christmas 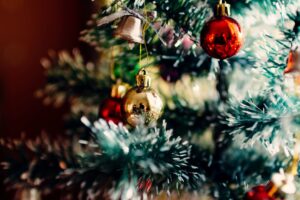 According to Gallup, this Christmas individual Americans intend to spend an average of $932 on gifts. That’s up nearly $100 over last year.

Are people planning to spend more because they have more money in their pockets? Not exactly.

Over the past year Americans have been relying more and more on credit to make ends meet. According to an analysis of Federal Reserve data by WalletHub, in the second quarter of this year alone credit card debt increased by roughly 6% compared to the previous quarter.

Americans haven’t yet reached the record debt load (when adjusted for inflation) of 2008. However, with record inflation and a dwindling savings rate, it seems we are trending that way.

But aside from what’s happening in the economy, there’s something about the Christmas season that lures us into overspending. Certainly it’s known as the season of giving. But there’s an emotional component that drives our habit of spending more than we know we should.

Christmas has become a season where all kinds of relationships are assessed. Parents, children, spouses, in-laws, and even employers will be judged by the kind of gift they give. And it’s a miserable feeling to be found wanting.

If you feel like you haven’t been on the best terms with a loved one, you might imagine that you can set everything right with an impressive gift at the end of the year. And impressive gifts are expensive.

Ironically, when someone treats us this way, we usually see right through it. We won’t be bought off that easily.

Reader’s Digest, the world’s largest subscription-based magazine, just passed the hundred-year mark. They’ve long been known for publishing amusing and poignant stories from their readers. In one collection you can read for free online, readers submitted family stories where something unexpected happened to make the holidays deeply meaningful—a case of “Christmas magic.”

These stories span a century, yet in nearly every one, the incident occurred when the people involved were facing a financial shortfall. A father has been laid off. A mother doesn’t have the money to buy the gifts her children want most. A family lacks the money to buy even a small Christmas tree.

Sometimes the “miracle” occurred in the form of an unexpected financial gift. But more often the people never got the wished-for windfall. And as a result they ended up figuring out how to make the season special anyway. The wonderful experience and the memory worth passing down came from the discovery that they were profoundly blessed in other ways.

The collection is worth reading as a reminder of the true meaning of the holidays (have a Kleenex handy), but the stories also serve as object lessons about the limits of money. While we all need it to live on, it often can’t buy the things we desire most.

We wish you and your family a happy holiday season and hope that it’s a time of deep enjoyment where you make lasting memories.